I am attempting to implement multiprocessing in Python (Windows Server 2012) and am having trouble achieving the degree of performance improvement that I expect. In particular, for a set of tasks which are almost entirely independent, I would expect a linear improvement with additional cores.

I understand that–especially on Windows–there is overhead involved in opening new processes [1], and that many quirks of the underlying code can get in the way of a clean trend. But in theory the trend should ultimately still be close to linear for a fully parallelized task [2]; or perhaps logistic if I were dealing with a partially serial task [3].

However, when I run multiprocessing.Pool on a prime-checking test function (code below), I get a nearly perfect square-root relationship up to N_cores=36 (the number of physical cores on my server) before the expected performance hit when I get into the additional logical cores. 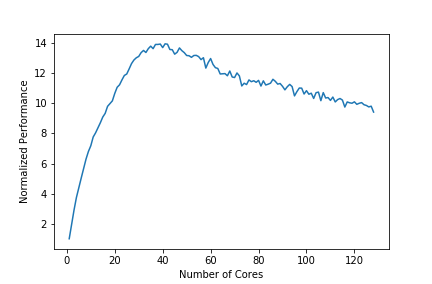 Is it normal to have this dramatic of diminishing returns with multiprocessing? Or am I missing something with my implementation?

Note: I am aware that for this task it would likely be more efficient to implement multithreading, but the actual script for which this one is a simplified analog is incompatible with Python multithreading due to GIL.

Register or Login
We use cookies to ensure that we give you the best experience on our website. If you continue to use this site we will assume that you are happy with it.Ok